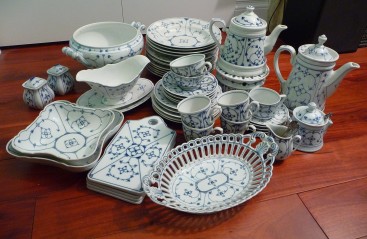 Susanne B. owns a large collection of china. It was made by the porcelain company Winterling and includes breadbaskets, cutting boards and a full coffee set. Porcelain production has a long history in Germany, beginning with the invention of European hard-paste porcelain in 1709 in Dresden. Today, most of the German porcelain is produced in Bavaria in the south of the country, as was this set.

Susanne, on the other hand, is originally from the north of Germany. She was born in Bremen, a large harbour city, which remains the geographical core for her family. Susanne studied biology at a number of German universities and decided to pursue a research career. Being a female academic she felt that Germany did not offer her the best opportunities. In 1995, she therefore decided to leave the country and accept a post-doctoral position at Warwick University in England. Two years later, in 1997, she was offered a job at University College London and moved to the city. For fifteen years now, Susanne has been the editor for the natural sciences magazine Trends in Plant Science.

The porcelain is one of the first things she took with her from Germany. ‘My great-grandmother had it stored in this beautiful cabinet, which I am hoping to bring over some time soon as well’, Susanne explains. ‘I would sit in front of this cabinet and admire the timeless beautiful pattern’. The pattern is called ‘Indian blue’, which makes reference in both name and design to the eastern origins of porcelain. Amazingly, the design, which was first developed by Winterling at the beginning of the twentieth century, remains almost exactly the same today.