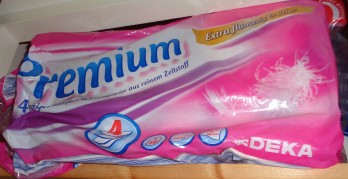 There are a few German products, without which Susanne K. does not feel quite at home in Britain: the Maggi instant soups, cold cuts like Bierwurst and cosmetic articles from the German drug store dm as well as toilet paper from the supermarket Edeka: ‘You hardly ever find good quality four-ply toilet paper in England; and if you do, then you have to pay through the roof for it’, Susanne explains.

It is perhaps one of the more peculiar objects to take back from Germany on a regular basis and Susanne laughs at the fact that her friends always bring a package or two: ‘My friend brought me this particular one in April. She carried it in her carry-on luggage and was stopped at security where they quizzed her for several minutes as to why she was taking toilet paper to the UK!’

Susanne is originally from East Berlin and she remembers the poor quality products with which she grew up: ‘The toilet paper was like newspaper; it was awful’. After the wall fell, Susanne and her family explored Europe on many trips. In 1994, she came to London for the first time and returned almost yearly thereafter. In 2005, she briefly worked in London and lived in Watford. She came back in 2006 for a Masters at the Metropolitan Business School after finishing her undergraduate degree at the Freie Universität Berlin. She has been living here ever since and now works as a project manager for the company HP.

Susanne loves the British culture, something she has gotten to know very intimately through her English boyfriend. In return, he has become very comfortable with the German products Susanne brings back from visits to Berlin: ‘He knows the quality simply can’t be matched here’.